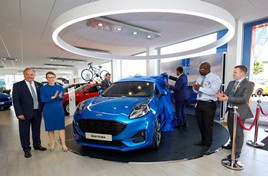 TrustFord has celebrated the opening of its newly upgraded Staines FordStore with a meeting of old and new…as the classic Model T Ford appeared alongside the newly-unveiled Puma crossover.

A £1.2m investment from the Ford of Britain-owned AM100 retail group saw the facility on London Road converted into a FordStore, which is the 12th Ford Store opened by TrustFord in a recent round of development in the brand’s latest CI push.

Lisa Brankin, sales director at Ford Motor Company, officially opened the facility alongside TrustFord chairman and chief executive, Stuart Foulds, at an event on September 4 which also included the presentation of a 55-year loyalty award to guest of honour Brian Bridgeman.

Commenting on the opening of the new site, which features a new interior floorplan and display areas, plus new exterior glazing, signage and architectural features, Foulds said: “We’re always looking for ways to drive the standard in customer care; that’s why we’re investing in FordStores across our network.

“These stores give us the scale and resources to meet our customers’ needs today and, importantly, into the future.

“I’m looking forward to seeing how these enhanced facilities will help colleagues in Staines continue delivering the excellent service that they are known for.”

Brankin, said: “I am proud to see the Ford family growing from strength to strength. I look forward to seeing how this latest investment in the Ford Store portfolio will help an already successful team bring their customers a fantastic new retail experience.”

Among the highlights of the Staines FordStore opening was the official unveiling of Ford’s new sporty Puma crossover, which appeared at the events alongside a classic Model T Ford.

TrustFord has invested heavily in its business over the past 12 months, with new FordStores – the latest of which opened in Belfast and Lisburn during May – and development of a new PartsPlus wholesale parts business and Quick Lane fast-fit facilities.

Bridgeman, who recently celebrated an impressive 55 years of service, was guest of honour at last week’s official opening of the Staines facility.

Hailing from Epsom, he originally joined Page Motors as a costing clerk in 1964, aged just 15.

Since then he has fulfilled a number of roles within the group, including acting service manager and warranty manager.

He now works three days a week as a Warranty Administrator at TrustFord Epsom where, TrustFord said in a statement, his colleagues praise him for his dedication, superb work ethic and eye for detail.

Bridgeman said: “The job plays to my strengths; I’m very accurate and take pride in getting things right, but I think it’s also important to have a sense of fun.

“When I reached retirement age I didn’t know what to do…until my manager suggested I went part time. It really suits me, leaving more time for me to go fishing and spend time with my four grandkids.”

Foulds said: “It’s a source of great pride to me that colleagues like Brian are part of our TrustFord Family.

“The great service our customers experience relies on the dedication of all our colleagues, but the commitment, expertise and strength of character that Brian has shown across his 55 years is exceptional.”