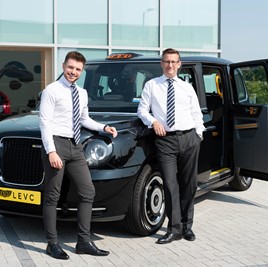 The group boosted its Volvo portfolio by 50% – to nine sites – and expanded into Berkshire with the acquisition of three HSF Group Volvo franchised sites in February and has now completed work to bring the Slough facility, on , in-line with the Swedish brand’s Volvo Retail Experience corporate identity (CI) standards.

Endeavour bought the business at the same time as High Wycombe (aftersales only) and Maidenhead locations and has boosted its potential earning ability with the installation of its second LEVC Taxi franchise at the same time, as part of a six-figure investment in the site.

Endeavour has also completed a full refurbishment of its Volvo West London dealership, located in Chiswick.

Both Volvo and LEVC are owned by China’s Geely Automotive and the latter is now poised for growth with expansion of its product portfolio to include a commercial electric vehicle (EV).

Volvo, meanwhile, realised its ambition to offer its full range of vehicles with a plug-in hybrid (PHEV) drivetrain option when it opened order books for the XC40 T5 twin-engine hybrid last week.

“Our new LEVC franchise provides a unique opportunity for taxi drivers across Berkshire to look at the financial and environmental merits of switching to zero emission capable taxis, which would bring long lasting benefits to the whole area over time.”

He added: “We’re also delighted to unveil our brand-new Volvo Retail Experience in Chiswick, which further reinforces our position as one of the UK’s largest and most forward looking Volvo dealers.”

A statement issued by the business said that it had already succeeded in achieving growth of 25% in 2019.

In an interview with AM earlier this year, managing director Adrian Wallington revealed that part of its growth would come from a new retail concept as it took over operation of the Hyundai store at Westfield Stratford City from Motorline.

Endeavour’s move into taxis comes as private hire taxi drivers in and around London are actively being encouraged switch to more environmentally-friendly and cost-effective taxis.

According to Endeavour, which is one of just three UK franchisees for LEVC, drivers of diesel taxis could save over £100 per week in fuel by switching to the new generation hybrid-electric taxi.

All four wheels are electrically powered on an LEVC taxi, but a small petrol engine acts as a range extending generator.