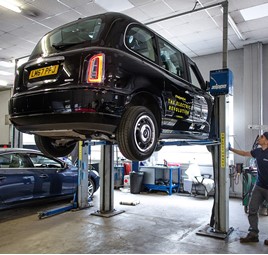 Endeavour is one of the largest Volvo dealer groups in the UK and LEVC has the same parent company as the Swedish-brand - Chinese manufacturer Geely.

The LEVC Chiswick facility will be a standalone dealership on the same road as Endeavour’s Volvo Cars West London showroom and will sell the TX electric taxi.

The TX is a plug-in hybrid range-extender electric vehicle designed to comply with Transport for London’s Taxi Private Hire regulations, which, from January 1 this year, means that any taxi driver applying for licence has to have a zero emissions capable vehicle. This will eventually lead to the phasing out of all diesel taxis in London.

In a statement from Endeavour, it said it decided to take on the franchise “after seeing the popularity of the new taxi with passengers and drivers, as well as the level of support from both national and city government for the electric taxi project”.

Endeavour has invested in its Chiswick site to increase workshop capacity to support the arrival of a new brand. The group is also investing in some dedicated fast charging points for taxi drivers to use while in West London.

These will supplement the 52 dedicated rapid chargers which are set aside for taxi use in London.

These chargepoints can be found on street and in five Q-parks across London, including China Town, Harley Street, Pimlico, Oxford Street and Knightsbridge.

Adrian Wallington, Endeavour Automotive managing director, said: “The extension of the Ultra-Low Emission Zone and arrival of electric taxis are measures that will significantly improve air quality in West London.

“Alongside this there will be a significant increase in demand for more environmentally friendly passenger vehicles in the capital.” Wallington said the TX can save taxi drivers up to £100 a week in fuel.

A spokesman for LEVC said the company is still on the look out for more dealers to take on the franchise in major cities in the UK.