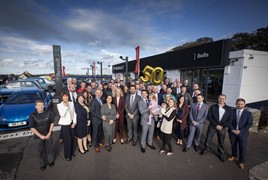 Located in the village of Crossgar, County Down, the long-standing Renault franchisee welcomed Tourette and the OEM’s network operations director, Louise O’Sullivan, as it celebrated the impressive milestone.

The dealership was awarded with a commemorative award, while several members of staff at the facility were presented with long-service awards to coincide with the occasion.

Tourette said: “Bells of Crossgar can be exceptionally proud of what it has achieved, and we would like to thank its team for the excellent representation of our brand over the last 50 years.

“Its knowledge, expertise and experience are second to none, which is officially recognised by its success in our annual awards and its ability to deliver an excellent customer experience and a strong commercial performance.

“Bells of Crossgar has played a significant role in the growth of our brands and we very much look forward to continuing our partnership.”

In an interview with AM Last month Tourette revealed plans to restructure Renault UK franchise operations as part of a market area strategy that would bring it in-line with manufacturers such as BMW/Mini and Mercedes-Benz, which already operate a ‘hub and spoke’ system in parts of the country.

Tourette, who first spoke to AM in 2017, said that the move would move bring about a reduction in its near-150 UK franchised sites, but said: “The idea is that each territory is given to a partner and this partner will, together with us, optimise the coverage in this area.

“This gives scale to our partners in the long term and different formats in terms of better adapting to the needs of the area – the needs in London are not the same as those in Scotland, for example.”

Founded by Kevin Bell in 1969, Bells of Crossgar is one of the very few solus retailers in the Groupe Renault UK dealer network.

A statement issued by Renault to mark its long-standing relationship with Bells of Crossgar this week said that the business had “consistently performed to a level that belies its size” with customers enjoying the familiarity of a long-established team and a location that has been the same since 1969.

The managing director of Bells of Crossgar, Charlie Bell, said: “We have enjoyed an excellent relationship with Renault from day one and its support and strong model range, particularly in the highly competitive small car sector, have helped us to reach where we are today.

“We have witnessed a great deal of change in the automotive industry, both in terms of retailing and vehicle technology, and while we have adapted, we have always stayed true to our ethos of family values.

“We have three generations of our family in the business and we are very proud that we have assisted many local families with their motoring requirements for nearly 50 years.”

Bell added: “There have been many highlights over the years, including winning a number of awards and launching some fantastic models, but the advent of PCP finance and the internet do stand out as game-changers for the business.

“They have allowed us to introduce more and more customers, many from further afield, to our service and the Renault brand.