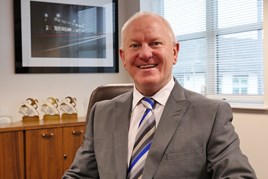 The AM100’s 98th-placed retail group has signed an agreement which will see it occupy the facility on Grange Lane, Stourbridge, with the Spanish brand and it expects the new facility to be open by January 2020.

News of Arbury's job creation expectations are good news for the area. Back in June the Express and Star newspaper reported on fears that the imminent closure of Pendragon's JLR dealerships had put 150 employees at risk of redundency.

Arbury Group managing director, Paul Goodwin, expressed a desire to expand with Seat during an interview with AM early last year, stating: “We’ve been given the go-ahead to establish a new Seat franchise, which will create a new market area.”

January’s planned opening of Seat Stourbridge will double Arbury’s representation of the brand, adding to its existing franchised site in Solihull.

Commenting on the new development, Neil Barrett, Arbury’s finance director, said: “We are delighted to be in a position to open for business in January 2020, once we have been able to give the site a full Seat makeover.

“At Arbury we have always had great relationships with our customers, staff and our manufacturer partners.

“We are excited to be adding a second Seat franchise to our portfolio and look forward to a bright future with the brand.”

Last year's growth followed 8% growth in annual turnover and a 5% increase in pre-tax profits in its financial results to December 31, 2017.