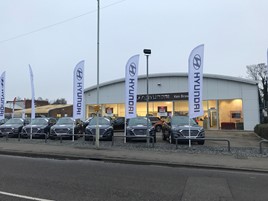 The group, which already operates Hyundai’s retail location in Richmond, along its Letchworth Suzuki and Kia franchises in Harlow and Stevenage, secured a new 10 year lease on the 0.78 acre site in Icknield Way, following the departure of its previous occupant Progress Suzuki.

Ken Brown Motor Group managing director, Jon Taylor, said: “We are delighted to have this opportunity to expand with Hyundai and look forward to growing our business in Letchworth and beyond with this exciting new brand for the town.”

Rapleys Automotive and Roadside team brokered the deal on behalf of the landlord, Fevore Limited.

Richard Forman, of Fevore, said: “We are delighted that Rapleys were able to secure continuing long term occupation of the property in a tricky market and without a rental void.

“The deal really was a ‘win win win’ allowing Progress to exit and Ken Brown to step in while also enhancing our asset’.”

Geoff Sayer, partner at Rapleys, said: “This demonstrates that opportunities exist in the current market for brands to invest in new and affluent territories”.

Yesterday AM reported on the opening of Vertu Motors’ new Hyundai dealership at Silverlink, North Tyneside. That opening followed the group’s opening of another new retail point with the brand, in Morpeth.

Last week the Korean brand mapped out its strategy to become “a game changer capable of setting the rules of the market” as it prepares to follow a year of consolidation with an “intense period of product launches”.