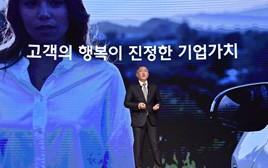 Hyundai has mapped out its strategy to become “a game changer capable of setting the rules of the market” as it prepares to follow a year of consolidation with an “intense period of product launches”.

In the UK, the brand said a reshaped business model would ensure improvements in mix and profitability ahead of intense period of product launch.

Ashley Andrew, Hyundai UK managing director, said: “The UK car market remains extremely challenging, but we enter the New Year with a solid business focus, an improved infrastructure and a wealth of all new and enhanced models joining the range.

“With our Company’s commitment to securing leadership in vehicle electrification, our already broad model range will be extended with even more electrified models in the years ahead.”

As revealed by the Society of Motor Manufacturers and Traders’ (SMMT) new car registrations data for 2019, which was published earlier this week, Hyundai’s UK sales declined by 7.4% to 83,284 last year, bringing a market share decline from 3.8% to 3.6%.

Earlier this year Andrew told AM that the brand had achieved its best-ever market share in 2018, despite ending a nine-year run of growth to end the year down 3.8% with 95,764 registrations.

A statement issued by Hyundai Motor UK described 2019 as “a year of consolidation” as the business “embarked upon a new long term strategic plan to ensure sustainable growth for the future”.

But, despite supply issues which led to lengthy lead times on the headline-grabbing Hyundai Kona EV, its range of electrified cars drove a 26.9% year-on-year sales, following the introduction of the Kona Hybrid and 48 V hybrid options.

Despite acknowledging that “many other brands are moving away from the city car segment” in a statement issued by Hyundai Motor UK this week, the brand will also attempt to mitigate a 14.3% decline in registrations of its i10 in 2019 with the introduction of a new model on January 18.

“This level of product innovation across the range stands us in good stead for the future and where it might lead us,” said Andrew.

Hyundai’s plans to expand its mobility services are unlikely to reach UK shores in the immediate future.

Chung revealed in his speech that the OEM will kick-start its car-sharing business in Los Angeles this year through its mobility service company MoceanLab, which was established in LA last year, while also expanding its line-up of vehicles offered through its vehicle subscription services in Moscow.

The Group will also expand collaboration with mobility platform companies it has strategically invested in, such as Grab (Singapore) and Ola (India).

Hyundai’s total planned group-wide investments for the future growth over the next five years is KRW100 trillion (around £66bn), Chung revealed.