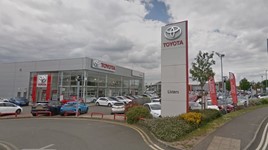 Listers Group's Toyota dealership in Nuneaton was targeted by thieves who stole the catalytic converters from five Prius hybrids and an Auris hatchback over the weekend.

Police have issued an appeal for information following the thefts from the franchised site’s forecourt, on Eliot Way, Nuneaton, at some time between 6.30pm on January 31 and 3pm on February 1.

A report on Coventry Live said that the vehicles also sustained dents and scratches in the course of the crime spree.

Damage was caused to the sill of the Toyota sometime between 2pm and 5.30pm.

Between 7am and 8pm on the same day, thieves removed the catalytic converter from a secure silver Lexus RX, which was parked in the nearby Eliot car park, Coventry Live reported.

Anyone with information about the rais on the Listers car retail site is being urged to contact Warwickshire police by dialling 101, quoting incident number 125 of January 31.

The force reported on January 29 that its Serious Collision Investigation Unit, supported by OPU, had arrested two men on the A452 and A46 near Kenilworth on suspicion of theft.

One of the men, aged 23 years old from London, was arrested on suspicion of theft from vehicle and going equipped.

The other, a 28-year-old from Stratford upon Avon was arrested on suspicion of theft.

The force said: “The men were initially stopped for no insurance as part of the roads policing operation.

“Officers also recovered number plates, four catalytic convertors, cutting equipment and car jacks from the vehicle after it was stopped on the A46 at 11.30am today.”