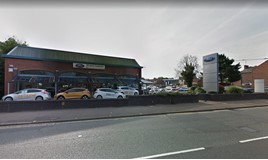 Two men have been arrested in connection with a late night raid on Evans Halshaw’s Altrincham Ford dealership which resulted in the theft of five cars.

The two men in their 20s were arrested in the Preston area as officers from Greater Manchester Police investigated the incident which took place at the Pendragon-owned Hartington Road retail site just after 2am on Monday (May 27).

Two Ford Fiestas have also been recovered following the incident which police believe involved a group of around 10 offenders, who gained access to the site via its Hartington Road entrance.

A man was subsequently discovered to have forced entry to the premises at 11.20pm on Sunday evening and stolen a number of car keys, according to the Altrincham Today news website.