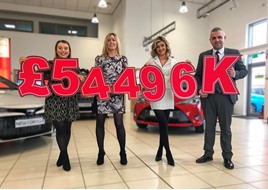 Lookers' Charles Hurst Toyota has raised a total of £54,496 through a series of charity events for Action Cancer.

As a result of their ongoing partnership with the charity, the AM100 group's Charles Hurst division have raised funds that will support life-saving breast cancer services in Northern Ireland.

The division, which has Toyota dealerships in Newtownabbey, Dundonald and Belfast, has so far donated two cars to the charity for two raffles and plan on donating a new Toyota Yaris this year as part of the ongoing partnership.

The news of the total raised from the fundraiser follows shortly after Lookers presented an award marking 45 years of service from George Currie in its Northern Ireland Charles Hurst dealerships.

Charles Hurst also appointed Alan Thompson as head of business at Jaguar and Land Rover base in Belfast last year (2019).