Autorola UK scoops employer and apprentice of the year accolades 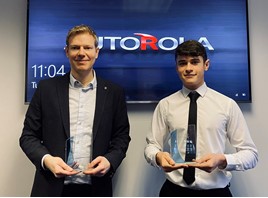 Autorola UK has been named as Employer of the Year as apprentice Billy Lloyd took the Apprentice of the Year Award at the Maxim Business Training Awards.

Autorola received the accolades at the ceremony which took place at Mottram Hall, Cheshire, in February.

More than 80 guests attended the event which was hosted by Tracy Cosgrave, Maxim’s director of employer enterprise and commercial services.

The awards celebrate ‘the achievements, hard work and commitment’ of students enrolled on Maxim’s apprenticeship programmes.

Autorola employee Billy Lloyd was awarded Apprentice of the Year for business.

He spent his first year at Autorola working in the operations department and moved over to sales in September 2019 and has since sold over 140 used vehicles.

The Macclesfield-based company has employed six apprentices in the last three years, where all six remain in the business and have passed their business admin qualifications.

Frost said: “We are delighted to have received this recognition from Maxim Business Training and are especially proud of Billy’s achievements – it has been fantastic to see him develop as a young professional.

“As a business, culturally we promote young people within the workplace and Maxim Business Training has been the ideal partner in supporting us with this over the years. We very much look forward to continuing to give more young people the opportunity to grow with us as a business.”

Autorola has worked with Maxim Business Training for several years to provide school leavers with apprenticeship training and qualifications.

Maxim Business Training is a scheme run by Macclesfield College of Further and Higher Education that works with employers at a regional and national level to provide vacancies.