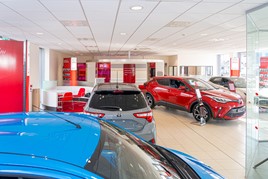 Hendy Group is preparing to expand its presence in Dorset with the opening of a new Toyota franchised site in Christchurch this month.

Almost 12 months on from the Hampshire-based AM100 retail group’s opening of a 200-car Hendy Car Store used car supermarket operation on Ringwood Road, at St Leonards, Ferndown, Hendy is preparing for further expansion with its Japanese franchise partner.

Work is well underway on the new showroom facility, in Stony Lane, Christchurch, and Simon Bottomley, chief operating officer at the business which is celebrating its 160th anniversary in 2019, described the new business as “an important new dealership” which would further reinforce the group’s commitment to east Dorset.

Bottomley added: “We already operate successful Toyota dealerships in Bournemouth and Salisbury and we are delighted that Toyota is keen for us to expand our offering in the south and that customers in the Christchurch area will have a brand new dealership closer to home.”

There will be room for five new cars in the showroom at the new Toyota franchised site, with the dealership also offering used cars, servicing and MOT facilities.

Its team of staff will also be highly trained in offering expert advice on alternative fueled vehicles (AFV), including Toyota’s latest plug-in hybrids and mild hybrids, a statement issued by the business said.

Recruitment is now underway for an additional technician to join the team and the opening has also created four new sales roles.

Bottomley added: “This is an exciting time for Toyota in Dorset and we are looking forward to bringing Toyota to a wider audience offering the premium Hendy service.”

Hendy Group chief executive, Paul Hendy, took to Twitter this week to issue reassurance to the group’s customers about the measures being taken by the business to mitigate the impact of the COVID-19 coronavirus outbreak.

Hendy also said that he and the business were ready to play a vital role in supporting local community members as and when they could.

Hendy Group kicked off 2020 with a Group Awards event to recognise the top performers among its 2,000-strong workforce after what was described as a “landmark year” for the 160-year-old business.

Hendy begun its anniversary year in style with the awards event, which was hosted by former England international rugby player and Question of Sport TV personality Matt Dawson at the Bournemouth International Centre.