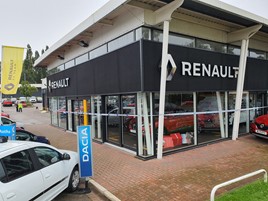 Lookers has officially re-opened the doors to its Renault dealership in Stockport – 12 months after a blaze that devastated the site.

A total of fourteen fire engines attended the incident at the height of the fire in the early hours of September 2 last year and the resulting renovation work has been all-encompassing.

The AM100 retail group has welcomed customers back to a facility which has been upgraded throughout and has been able to grow its workshop capacity from 10 to 12 ramps in time to join the COVID-19 recovery.

“I’m excited to see the site reopen with a facility that we are incredibly proud of. I know that myself and the team are looking forward to welcoming our customers through the doors.”

He added: “This brand-new dealership delivers a modern, fresh and functional environment for both the team and our customers.”

The sales and aftersales teams from the Lookers Renault franchise had to be relocated to nearby Wellington Road during renovation of the fire damaged dealership.

Lookers told the MEN that the rebuild had cost over £3m.

Luckily, the main showroom was not affected by the fire, which had started in a valet bay.

Speaking to AM at the time Sytner Group divisional managing director, Steve Gough, said: “We would firstly like to thank the emergency services and in particular the Fire Service for their efficient response and preventing the fire spreading any further which has resulted in only superficial damage to the building.”