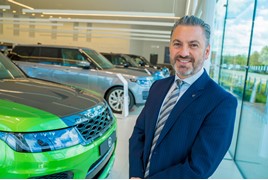 Vertu Motors has welcomed a new senior leadership team at its Farnell Jaguar Land Rover (JLR) dealership in Bradford following completion of a £2.4 million makeover of the facility.

John Steele joins the operation, on Kings Road, as head of business in an expansion of his existing role at Gordon Lamb JLR in Chesterfield, while Simon Davis has been appointed as brand manager, making the move from his post as sales manager at the recently updated Farnell Land Rover Nelson site.

Additional electric vehicle (EV) charge points have also been installed at the retailer to accommodate JLR’s new generation of electric and plug-in hybrid (PHEV) models, with Range Rover Evoque PHEV now in showrooms and a plug-in version of the new Defender 4x4 also set for release later this year.

Jatinder Singh Aujla, group operations director at Farnell Land Rover, said: “As Bradford is my hometown, I am very proud of the new retailer here.

“One of the additional benefits of the refurbishment is that it has created a more spacious environment to better support social distancing measures.

“The site is state-of-the-art, and embodies the luxury, unrivalled experience our customers will receive. I look forward to welcoming customers, new and old, to Farnell Land Rover Bradford.”

JLR's sprawling Dual Arch Concept retail facilities continue to be developed by car retail groups a year after AM's reports that the OEM had reduced its development demands at certain locations.

The AM100-topping car retail group’s new 17,000sq-m facility is one of only eight ‘Global Statement’ JLR retail sites worldwide and is said to be visible to around 72,000 drivers daily due to its close proximity to the M3.