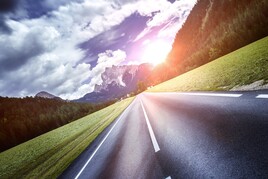 A new pay-as-you-drive road pricing system could soon be introduced to replace traditional vehicle excise duty (VED) and tax on petrol and diesel, in order to plug the huge tax loses caused by a shift to electric vehicles (EVs).

MPs on the Transport Committee are urging the Government to reform motoring taxation and devise a new pricing system by the end of 2022.

The switch to EVs means current road tax revenues of £35 billion a year from fuel duty and VED could disappear by 2050, unless ministers act now.

The Transport Committee report on road pricing, published today (Friday, February 4), says the Government should consider a road pricing mechanism that uses telematics technology to charge drivers according to distance driven, factoring in vehicle type and time of day.

MPs say they have not seen a viable alternative to a road pricing system based on telematics, suggesting it is the only route the Government can take if it wants to reform motoring taxes and plug the potential shortfall in revenues.

“The Government’s plans to reach net zero by 2050 are ambitious. Zero emission vehicles are part of that plan. However, the resulting loss of two major sources of motor taxation will leave a £35bn black hole in finances unless the Government acts now - that’s 4% of the entire tax-take.

“Only £7bn of this goes back to the roads; schools and hospitals could be impacted if motorists don’t continue to pay.”

MPs say that without reform, policies to deliver net zero emissions by 2050 will result in zero revenue for the Government from motoring taxation.

The Government outlined its plan to force new car and van buyers into EVs by 2030, as part of a 10-point “green recovery” plan in November 2020. The sale of new purely petrol and diesel-powered cars and vans will be banned in 2030.

The AA’s president, Edmund King, believes that, while many drivers accept the principle of ‘pay-as-you-go’, according to research conducted by the AA, they do not trust politicians to deliver a fair system.

“Hence, we agree with the committee that any new taxation proposals should be put forward by a body at arm’s length to Government and any new scheme should be revenue neutral and we believe the charges should be set independently,” he said.

Research from the RAC also suggests that drivers broadly support the principle of ‘the more you drive, the more tax you should pay’, with nearly half (45%) saying a ‘pay per mile’ system would be fairer than the current regime.

RAC head of roads policy Nicholas Lyes said: “Whatever any new taxation system looks like, the most important thing is that it’s simple and fair to drivers of both conventional and electric vehicles.

“Ministers should also consider ringfencing a sizeable proportion of revenue for reinvestment into our road and transport network.

“The Treasury needs get moving on this sooner rather than later.”

In October, the British Vehicle Rental and Leasing Association (BVRLA) told MPs on the Government’s Transport Select Committee that the rise of electric vehicles (EV) has presented a “clear need” for road pricing.

BVRLA director of Corporate Affairs, Toby Poston, who gave evidence to the Committee in October said: “Road pricing involves a total rethink about the way we tax motorists and incentivise transport behaviour. It is a controversial topic, and one that successive Governments have chosen to avoid.

“Rapid transport decarbonisation and the 2035 Phase Out means that policymakers have to get off the fence and start providing a roadmap for the future of motoring taxation. BVRLA members have set out their road pricing principles, and we are delighted that the Transport Select Committee agrees with so many of them, particularly the need to make any system revenue neutral and think about the needs of essential road users.