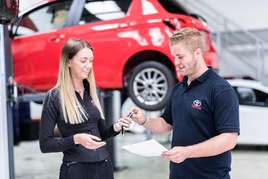 Vertu Motors has launched a recruitment drive to attract staff to four new Toyota franchised car dealerships after taking over the brand’s West of Scotland territory from Arnold Clark.

Macklin Motors is poised to open its first new Toyota site in Glasgow on April 1 and has begun the process of recruiting for 30 staff to man the Japanese brand’s franchised site, including technicians, sales advisors, and a certified management accountant.

It will be Vertu’s fourth Toyota dealership, adding to existing sites in Chesterfield and the Leicester and Loughborough businesses added through the £9.2 million December acquisition of Farmer & Carlisle.

And three more Macklin Motors Toyota dealerships are in the pipeline after Vertu inherited the West of Scotland market area from Arnold Clark as part of a process which ended its new car franchise partnership with the brand in Aberdeen, Ayr, Paisley, Stirling and two in Glasgow.

Commenting on Vertu’s growth with Toyota, and resulting recruitment drive, the AM100 PLC’s chief executive, Robert Forrester, said: “This is an exciting period of growth for Macklin Motors as we expand our representation in Scotland.

“As we drive our operations forward, in partnership with the distinguished Toyota brand, the next step is to appoint a dynamic and enthusiastic team of colleagues that have the skills and dedication, across a range of roles, to deliver excellent service to our customers.”

In an exclusive interview with AM last month Arnold Clark chief executive Eddie Hawthorne said his business expects to sever ties with more new car franchises after its recent exits from Ford and Toyota.

But while Hawthorne said that “two or three” more of the group’s established brand partnerships could be drawing to a close, he said that the moves were part of a refranchising operation as the group looked to the future with confidence.

Hawthorne said: “In terms of the manufacturers that we have got an issue with, it was just a case that we were headed in different directions.

“We’ve been with both Ford and Toyota for a long number of years, and I have huge respect for both brands, but it was just time to go.”