Peter Vardy Group has raised more than £200,000 for the people of Ukraine and will donate 10% of its profits in March to humanitarian projects in the country.

The Motherwell-based AM100 car retailer – winner of the AM Awards 2021’s Community Hero accolade – is dedicating its ‘One Child’ programme to the Ukraine appeal for the month of March 2022. For every car sold, Peter Vardy Group donates £15 to One Child and asks customers to match their donation. On average, seven out of 10 customers match the Peter Vardy donation.

Peter Vardy, chief executive of Peter Vardy Group, said the business “stands in solidarity” with the people of Ukraine: “We believe every life is worthy and we are shocked and saddened by the recent events in Ukraine.

“As a Group, we are committed to help support the people affected by the invasion of Ukraine and have redirected our current Giving Back programme to support humanitarian projects there.”

So far, Peter Vardy Group has given £200,000 to The Big Give, a matched donations platform where funds are raised for the Disasters Emergency Committee (DEC), an umbrella group of 15 UK aid charities which coordinates and launches emergency fundraising appeals.

Peter Vardy Group donates 10 per cent of its annual profits to good causes across the UK and internationally, with funds being distributed through the Group’s charity foundation, The Peter Vardy Foundation.

Giving Back is the Group’s community giving programme, with employees from across its 15 dealerships and two offices taking part in regular fund raising and volunteering activities to support the communities within which each operates. 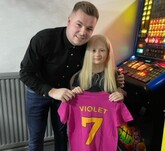