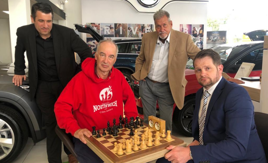 It will be a case of ‘Czech mate’ Lightcliffe Skoda’s Warrington car dealership staff when they further plans to become a community hub by hosting to a junior chess championship early next month.

Following a theme of diversifying the use of the dealership and inviting in community activities explored in the newly-published edition of AM magazine, general manager John Sharp came up with the idea of The Lightcliffe Junior Rapid Play Chess Championship.

Scheduled to take place on July 2, the event is the result of a partnership with the Warrington and District Chess League and has already attracted the attention of the Warrington Guardian newspaper, alongside junior chess players from across the region.

Sharp told the newspaper: “The Lightcliffe Skoda, Junior Rapid Play Chess Championship on Saturday 2nd July is a direct result of our ‘business in the community’ philosophy.

“We created the internal role of ‘Community Initiative Champion’ as a way to seek out more imaginative ways to reach out into the local community. Our chess event is proof of this doctrine.”

Sharpe added: "Even though our showroom will be dedicated to the event during the day, it will still be ‘business as usual’ on site with our helpful sales force eagerly on hand for any enquiries.”

Lightcliffe said that talks are already under way with Warrington Youth Zone (WYZ) to further Lightcliffe’s ‘business in the community’ approach through more jointly-developed community driven initiatives at its Dallam Lane facility.

WYZ have offered one year’s free membership to participants in The Lightcliffe Junior Rapid Play Chess Championship as part of the partnership.