Eden Motor Group raise over £30k for charities and communities 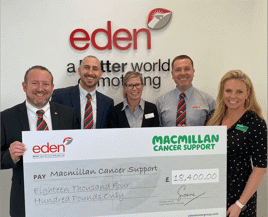 Eden Motor Group is celebrating fund-raising success after raising more than £30,000 for charities and community groups in the past 12 months.

The Berkshire-based AM100 business recently presented a cheque for £18,400 to MacMillan Cancer Support, raised from coffee mornings held by the group, and were involved in a charity football match in aid of Sophie’s Journey - helping to raise over £25,000.

Grame Potts, owner and chief executive officer (CEO) at Eden Motor Group, said: “Supporting local groups, causes, and charities is core to our values as a member of the community where our dealerships are based.

“We’re very proud of our colleagues and customers who go the extra mile to support this.”

The group has also supported grass roots footbal with sponsorship of the Torbay Police FC Youth Team and Okehampton Argyle Youth Under 9s.

Potts added: “We know how important it is to provide these teams with a kit that they can play proudly in each week, are delighted to be able to support, and to have Eden on display on their shirts.”

Eden said it also holds a number of VIP events each year where it gives prize money back to its customers.

There has been one VIP Event winner this year – Deborah Lord of Chilton, who bought a new Mazda 3 from Eden’s Basingstoke site and received £10,000.

Eden’s next MacMillan coffee morning will take place across its network of dealerships on September 30.