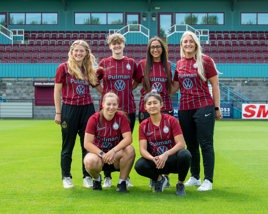 VW Group specialist Pulman is the shirt sponsor for both women’s and men’s teams for South Shields FC.

Pulman have Volkswagen, Škoda, Seat and Cupra dealerships across the region as well as offering Commercial Vehicles (CV), but it is the VW logo along with the Pulman name which will adorn the home strip for the men and women.

After just missing out on promotion last season via the play-offs, the men’s team start as favourites to complete a move out of the Northern Premier League by April 2023. This will also be the first season in charge for new manager Kevin Phillips.

“To be the front of shirt sponsor for both the men’s and women’s teams is a real honour.

“We’ve developed a fantastic relationship with Geoff Thompson (chairman at South Shields FC) and his team over the past seven years and working alongside Glen Stidolph (executive director), the club's ambition and vision for this season and beyond is something we wanted to be a part of.

"You can see this with the investment in the squad and infrastructure. The collaboration between us has really worked well and this is evident in all the promotional activity around the shirt launches. We’re excited to be part of the SSFC story and can’t wait to see success on and off the field."

Castrol to host football tournament for workshops and retailers

Castrol to host football tournament for workshops and retailers