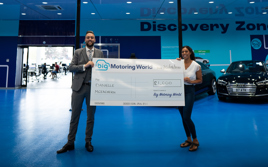 Earlier in the summer Brits were encouraged to nominate 'heroes’ who go above and beyond to help people in their local area to receive a fuel voucher worth either £1,000 or £500.

The giveaway idea was inspired by Big Motoring World’s group CEO, Peter Waddell, who was sleeping rough on the streets for many years before building the brand over more than three decades ago.

His first-hand experience of how difficult life can be led him to recognise the importance of giving back and helping others when possible.

More than 200 nominations were received during July and whittled down to five particularly deserving candidates.

A public vote then took place, over 47,000 people helped determine the winner and runner up.

Adam Turton from Big Motoring World in Peterborough presented Danielle Mceachern, 30, a pediatric nurse with the first prize of a £1,000 fuel voucher.

Based at Peterborough City Hospital, Danielle worked on the front line during the Covid-19 pandemic, including taking shifts in intensive care – despite this being outside of her remit as a children’s nurse.

She was in full PPE for many 12 plus hour shifts, getting only very irregular, short breaks.

In February 2021 she found out she was pregnant and was back working on the children’s ward at this point.

However, she was left ‘devastated and heartbroken’ in April 2021 when she miscarried at 11 weeks.

She carried on working to support her team who were short-staffed, and happily fell pregnant again in August.

After discovering that she’d won the prize, Danielle said: "I really am lost for words. Thank you so much to all my friends, family and local community who voted for me and a huge well done to the other finalists for all of their achievements to date.” 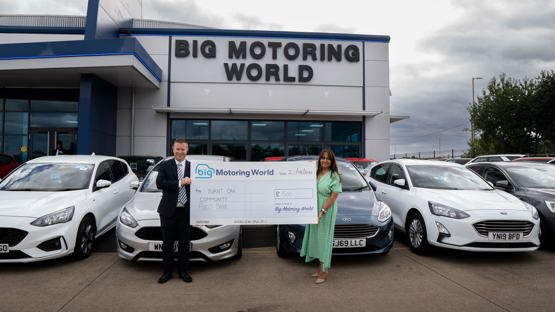 Deepa has been feeding the homeless for 10 years. She used to distribute whatever food provisions she could get hold of from the boot of her car, but when Covid hit, she immersed herself even further into her charity work after being inundated with calls and messages from people in need.

In March 2021, she set up a pilot food bank in Burnt Oak, which she describes as ‘an area with high levels of deprivation’. A year and five months later, just over 47,000 people have benefited from Burnt Oak Community Food Bank.

On receipt of her £500 prize, Deepa said: “We are delighted to be voted runners up in the Big Motoring World Fuel Voucher giveaway. We had no idea so many people had written in about the work we do in Burnt Oak.

“This is truly a blessing and the £500 will help us to distribute more emergency food parcels to the elderly and families suffering from food poverty. It will also help refuel the van we hire for the food bank and go towards purchasing items we are incredibly short of.”