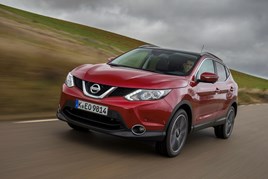 Nissan has been named Manufacturer of the Year and its Qashqai Car of the Year in the first Carwow New Car Buying Awards.

Nissan’s crossover also picked up Mid-size Car of the Year. Nissan was highlighted for its “exemplary customer satisfaction for carwow users over the 12 months from September 1, 2014”.

The New Car Buying Awards use real-time data on car-buying transactions to establish customer satisfaction. They take in to account how quickly dealers answer calls, how fast they respond to enquiries and customer reviews.

All of this data is converted in to a CSI (Customer Satisfaction Index), with a maximum score of 10, and Nissan’s 8.7 rating was the highest on the site, securing it Manufacturer of the Year 2015.

This CSI data also makes up one-third of the New Car Buying Awards criteria for Car of the Year, alongside a car’s ‘wowscore’ – an average score awarded based on the combined opinion of the UK’s top motoring media – and sales figures through carwow.co.uk.

Since some manufacturers have more dealers signed up than others, the results are normalised. Each of the three judging criteria has a maximum score of 10 for a theoretical total of 30.

With its CSI score of 8.7, a normalised sales figure of 10 and a ‘wowscore’ of 8.9 the Nissan Qashqai scored a total 27.6, giving it the highest score of any car on the site and granting it the Car of the Year and Mid-size Car of the Year crowns for 2015.

Mercedes also picked up two awards in the Carwow New Car Buying Awards: the C-Class won Premium Executive Car of the Year, while the SLK was awarded Sports Car of the Year.

The C-Class was well ahead of its rivals, boasting a score of 25.7, with the C-Class Estate taking second place thanks to a score of 20.8. In the Sports Car category, where sales in general aren’t quite as strong, the SLK scored 19.8, with its closest rival the Toyota GT86 at 17.2.

In recognition of the most improved customer satisfaction for a manufacturer’s dealers over the past year, the Rising Star Award went to Alfa Romeo.

Car of the Year

Small Car of the Year

Mid-size Car of the Year

Large Car of the Year

Sports Car of the Year

Premium Executive Car of the Year

Manufacturer of the Year