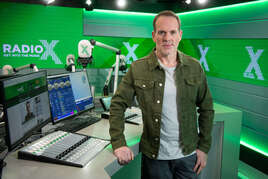 Motorpoint has teamed up with The Chris Moyles show on Radio X to give away a car worth over £20,000 in its latest marketing drive.

The independent car retailer will sponsor the Radio X ‘Car Roulette’ on The Chris Moyles Show, where listeners will be given the chance to answer a question and secure one of the 37 numbers on the roulette wheel plus £250 cash, from May 24 onwards.

At the end of the month (May 28), Dominic Byrne (The Chris Moyles Show) will drive the car around a roulette-style track and whichever number it stops on will correlate to the person who will win the prize from Motorpoint.

Hayden Vokes, marketing director at Motorpoint, said: “We’re big fans of The Chris Moyles Show and the idea of teaming up with Radio X for the ‘Car Roulette’ feature was a no-brainer given the station’s reach across the UK.

“It promises to be a lot of fun and, as an added bonus, we’ll be using our national free home delivery service to bring the prize direct to the winner’s door shortly afterwards!”

Motorpoint recently revealed that 52% of its used car sales were completed online during a COVID-hit 2020 trading period.

A dog and a set of false teeth feature are among Motorpoint’s top ten ranking of the most unusual things to be left inside vehicles by customers trading-in a car as a part-exchange.