The Finance and Leasing Association have revealed that new business volumes in the point of sale consumer new car finance market fell by 7% year-on-year in October.

Mirroring the trend in private new car sales, finance sales declined in the first month of 2017’s final quarter but the value of new business increased by 2% over the same period, the association said.

Geraldine Kilkelly, head of research and chief economist at the FLA, said: “Falls in new business volumes reported by the POS consumer new car finance market so far in 2017 have mirrored trends in private new car sales. FLA members’ penetration of this market has held steady at around 86%.

“In 2017 as a whole, new business volumes in the POS consumer car finance market overall are expected to be around 2.3 million, a similar level to 2016.”

The percentage of private new car sales financed by FLA members through the POS was 86.1% in the twelve months to October, compared with 86% in the same period to September.

The POS consumer used car finance market reported new business in October up 15% by value and 9% by volume, compared with the same month last year. 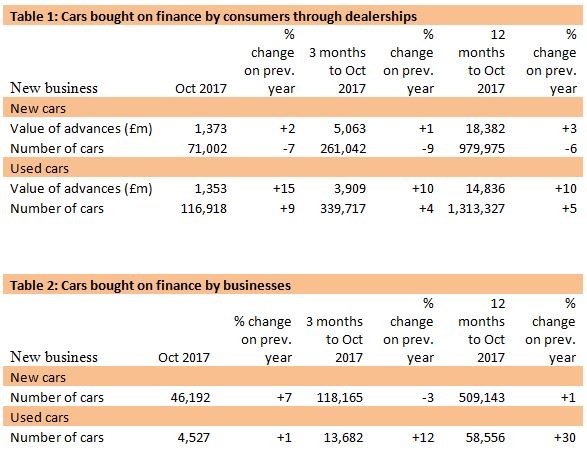