The number of consumer new car purchases funded by the Finance and Leasing Association’s (FLA) members declined by 18% in December to end a COVID-impacted 2020 down 25%.

In data published this morning (February 11), the FLA revealed that the decline in the consumer new car finance market outstripped the 10.3% decline in new car registrations reported by the Society of Motor Manufacturers and traders (SMMT). 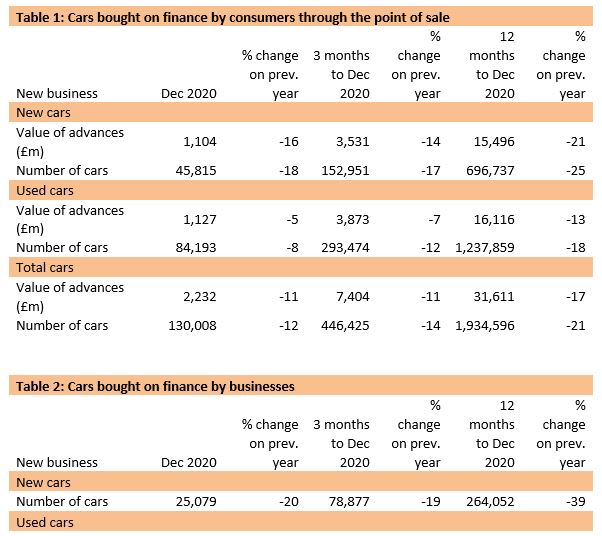 Finance and Leasing Association (FLA) car finance data table for December 2020However, consumers’ used car purchases funded on finance continued a more resilient trend, ending the year with an 8% decline by volume (to 84,193) in December to finish the year down 18% at 1.24 million.

Geraldine Kilkelly, head of research and chief economist at the FLA, said that the lifting of COVID-19 ‘Lockdown 2’ restrictions in England in December had “contributed to an easing in the rate of contraction in new business in both the consumer new and used car finance market”.

She added: “Despite the restrictions introduced throughout last year as a result of the pandemic, the consumer car finance market provided finance for over 1.9 million cars in 2020 as a whole.

“The vaccine rollout in the UK has improved the outlook for the UK economy in the second half of 2021.

“Almost two-thirds of motor finance respondents to the FLA’s Q1 2021 Industry Outlook Survey expected some growth in new business over the next year if economic conditions improve.”