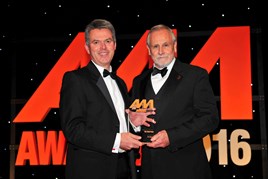 Kia’s third-generation Sportage has secured the distinction of AM’s Used Car of the Year award as a swan-song to mark its final year of production.

Used markets like the rakish contender too, thanks to strong residuals and main dealer service book stamps delivered as a result of Kia’s seven-year warranty.

According to Auto Trader, the Sportage was the fastest-selling used SUV of 2015 – taking an average of 30 days at an average price of £19,161 – and the fourth-fastest seller overall, behind the Ford Fiesta, Vauxhall Insignia and Toyota Prius.

Three engines – a 1.6-litre GDi petrol unit and 1.7- or 2-litre CRDi turbodiesels – are available in a range divided into three basic specifications, with four-wheel-drive, an automatic gearbox and sat nav providing further options.

Early, high-mileage Sportages can be bought for as little as £8,000, but AM believes the newer crop of third-generation models is likely to remain a used car hit during the coming year.