AM Awards 2016 - Retailer of the Year - Arnold Clark Automobiles 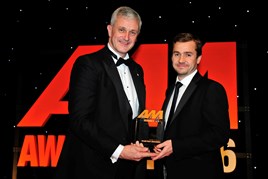 Arnold Clark Automobiles beat the likes of Peter Vardy, TrustFord, Swansway and Perrys to win Retailer of the Year, which is selected from the winners of AM’s retailer categories*.

Last year, the Scottish automotive retail giant announced its third consecutive year of record results, for 2014, and our AM100 analysis in the spring saw the privately owned group make the most profit of any of the largest franchised dealers in the UK for the second consecutive year – £107 million, an impressive 26% growth on turnover up 12%. Net margin is now among the very best in the industry, at 3.6%.

Group acquisitions plus the opening of Renault’s biggest UK dealership in December saw the number of employees grow to more than 10,000 across more than 200 UK dealerships, representing 23 manufacturers.

Continued acquisitions, plus the promotion of apprenticeships and a focus on offering work experience opportunities in its local communities, were recognised by AM as laying the foundations for Arnold Clark to be one of the finest UK automotive retailers.

The AM Awards judges were unanimous in their choice of Arnold Clark as the winner of this prestigious award.