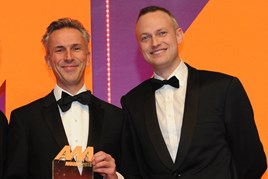 The evolution of Volvo’s growing range and its efforts to distinguish its retail network from the premium market establishment earned the AM judges’ approval in 2018.

The latest generation of its products show that it has finally earned a place alongside the dominant German premium brands after decades being widely regarded as a wannabe. The XC90 large SUV and S90/V90 saloon/estate range have put it on the consideration lists of wealthy Audi and BMW die-hards, and smaller products coming through show plenty of promise.

Its original XC60 SUV became a best-seller for the brand and the new one, launched in Q3 2017, is compelling enough to sell in high volumes – earning it the AM Award for New Car of the Year 2018.

Volvo’s range is about to expand with its smallest SUV, the XC40, which promises more growth opportunities for its dealers. The XC40 launches into a popular market segment where it can compete with the Audi Q2, Mercedes-Benz GLA-Class and BMW X1. Its CMA platform will also spawn a replacement V40, giving dealers a good renewal opportunity for many of the customers won over by the first generation of the hatchback.

Plug-in hybrids have featured in Volvo’s V60  line-up since 2013, but it is now poised to capitalise on current demand for PHEVs as diesels remain politically threatened. It promises to have hybrid or pure electric powertrains in every new model line from 2019, and won masses of positive publicity from international news organisations after its decision was widely mis-reported as a ditching of conventional internal combustion engines.

There are signs of dealers’ faith in the manufacturer’s future. Major groups such as Lookers and Marshall Motor Holdings are investing millions of pounds in new showrooms, and it is the launch franchise for Waylands Automotive, the new business started by John O’Hanlon since the 2016 sale of AM100 group Ridgeway, which he co-owned.