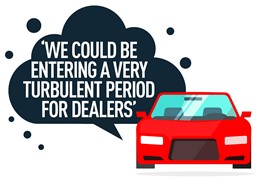 A move towards ‘real-world’ fuel economy and emissions tests could see retail demand rise ahead of the critical September plate-change, but the headache of re-testing entire ranges may also lead to product shortages afterwards.

Some dealers are concerned the legislation may prompt a spike in manufacturer ‘push’ and market ‘pull’, similar to that experienced ahead of the changes to VED in April 2017. It has been claimed that manufacturers are likely to want to clear their books of NEDC-rated vehicles and fleet operators will want to beat an anticipated rise in emissions under the new testing regime.

In an attempt to mitigate the impact of the changes after September 1, a ‘derogation’ rule will allow manufacturers to retail NEDC-tested cars built before June 1, but only in volumes equivalent to 10% of their total 2017 registrations.

At least one industry insider told AM that may not be enough.

“We could be entering a very turbulent period for dealers. The reality is that you could be faced with a huge influx of cars to register before September 1 and then a shortage of vehicles that have yet to be tested under the WLTP rules afterwards,” he said.

“Without doubt, fleet will be the biggest headache. For some retailers, it might be necessary to completely re-appraise the channels they sell into.”

Research by Cap HPI has found that WLTP test figures, which are correlated back to an NEDC equivalent using a tool called CO2MPAS, are typically 10% higher – delivering a rise in benefit-in-kind (BIK) tax for many.

Manufacturers have taken varying approaches to the new legislation.

In May, Volvo announced it had completed WLTP testing on all models and would sell using the new correlated figures.

While this increased its range’s CO2 ratings before the switch-over, it may smooth the transition at a time of rising registration volumes for the brand.

In early June, Volkswagen Group said production of up to 250,000 cars from its group brands in the second half of 2018 will be delayed, with potential factory shut-downs in Germany as vehicles are made WLTP-compliant.

AM’s source said: “The timing of the switch-over is very tough for retailers and it could very well affect their remuneration.

“Whether they are incentivised heavily to push some manufacturers’ 18-plate stock before September could be a key issue. After that, the threat of limited supply that would normally help them reach their targets could be a factor.”

Another blow to buyer confidence?

Dealers are also concerned that if the changes are implemented without proper communication to car buyers, it could cause another crisis of customer confidence.

Stuart Foulds, chairman and chief executive of TrustFord, said: “If the WLTP delivers a rise in emissions across the board, then it will knock buyers’ confidence further. If the VED rates go up, people will immediately feel that they have been conned.

“There’s not been enough publicity about WLTP to inform the public of the changes and it could come as another shock to the market.

“Manufacturers haven’t been talking about it much and I can only think that it’s down to a stigma, because the new tests have basically been brought in on the back of an emissions scandal.”

With many car buyers now researching their next purchase online, it is feared that review sites featuring pre-WLTP and RDE test data could deliver false expectations for customers.

Peter Smyth, director at Swansway Group, said: “The reality is that while WLTP has been gaining column inches in the trade press, it really hasn’t entered the mainstream yet.

“Consumers aren’t aware of it and that’s a real risk when they walk into the showroom.”

Mike Hawes, the chairman of the Society of Motor Manufacturers and Traders (SMMT), said it was essential for manufacturers and retailers to make customers aware of the changes.

“The cars will be the same, but the consumer will see a negative effect on the headline performance figures and that is something we will have to continue to work hard to educate them on,” he said.

“The introduction of the new test regime will be like someone submitting a GCSE paper to an A-Level examination. The cars will be the same, but the results will be very different. Manufacturers and retailers all have a responsibility to help the public understand why that is.”

Market analyst Jato Dynamics described the shift to the new WLTP test procedure as “a seismic change in the automotive industry”.

In its study into the changes, Jato found the test standard would “result in higher purchase and ownership taxes” for motorists.

It said: “NEDC-correlated CO2 figures are higher than previous NEDC-tested values, and the disparity could be greater than the industry expected.

“Furthermore, our initial findings suggest that the NEDC-correlated values are resulting in higher purchase and ownership taxes for the end user in some cases.”

The impact on fleet sales

The most significant effects of the switch to WLTP-correlated fuel economy and emissions figures in September are likely to be in the fleet sector, where shifts in BIK tax bands are likely to affect vehicle choices.

A move away from the option of a business car could boost the retail market, however.

The Government may announce changes to the BIK tax policy in the autumn in an attempt to curb the effects of tax increases triggered by WLTP, but Foulds fears there will be pain for retailers and manufacturers in the interim.

“I think the resulting rises in BIK will result in complete confusion for many and a lot of pain from cancelled orders across the brands,” he said.

Caroline Sandall, the deputy chairman of fleet representative body ACFO, told AM’s sister title, Fleet News, that many of its members were concerned that the WLTP/NEDC correlation had resulted in the same vehicle coming out of the matrix with “a much higher CO2 value”.

She added: “I do think someone needs to explain why there is such a variance between NEDC and NEDC-correlated figures. The whole thing has been badly managed and implemented.”

Cap HPI believes fleet sales could spike ahead of September 1, but said retail sales are expected to remain stable.

Andrew Mee, senior forecasting editor (UK) at Cap HPI, said: “On the retail side, consumers aren’t fully aware of WLTP, and if they are, then many will not be overly concerned about official figures that only impact on VED rates.”

Mee said fuel consumption will be the greater concern for the retail buyer, adding that plug-in hybrids may suffer the biggest reduction in sales.

A Cap HPI study of emissions data showed petrol vehicles had increased by an average 7.3% under the new test, petrol-hybrid by 7.8% and diesel vehicles by 12.6%. However, figures for petrol/plug-in hybrids increased by 27.3%.

“I think we’ll see diesel affected the least and that could actually bring the retail customer back”, he said.

The business will open the UK’s first dedicated Real Driving Emissions (RDE) testing centre, in Northampton, on July 31, and it has seen first-hand the effect of the changes on manufacturer resources.

Daren Mottershead, sales and marketing manager, said: “I believe development costs will have trebled. Some manufacturers will be scrapping product simply because they run out of time to develop it.”

He said the new WLTP and RDE regimes demand tests that simulate a range of altitudes and temperatures. Unlike the NEDC test cycle, the tests also account for the effects of optional equipment on weight and drag.

Pates said the result will be more pre-tested option packs for customers – reducing the scope for bespoke configurations – but added: “The result is a more accurate representation of what the engine delivers. It should be communicated as a positive step for car buyers.”