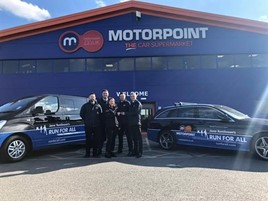 Motorpoint has put itself at the top of the podium for marketing exposure by providing support vehicles for a series of high-profile charity runs to be held over the next six months.

The ID50's top car retail operator has delivered a fully-liveried lead car and support vehicle to the Asda Foundation Series runs between April and October as part of its ongoing support of Run For All, which organises the charity events.

Over 70,000 people, aged from three to 86-years-old are expected to participate in runs such as the Burnley 10K, Derby Half Marathon and Sheffield 10K.

Motorpoint’s marketing director, Eleanor Shakespeare, said: “We are delighted to be able to provide Run For All with cars for the 2019 Asda Foundation Series and hope they will guide the series’ elite runners to countless personal bests whilst at the same time inspiring other runners to get involved in the Series and raise lots of money for the charities they are supporting.”

To date, Run For All has raised over £7.6m to support children’s and cancer charities in the UK.

Run For All’s sponsorship and corporate manager, Nicola Christian, said: “We have a great relationship with Motorpoint and are very happy to have been able to strengthen our partnership with them this year.

“Both the cars Motorpoint have provided look fantastic. And one has already guided a runner, Lucian Allison, to achieving the fastest ever time for a 10k in twelve years of Run For All history. It seems that they might prove a lucky charm for our elite runners this year.”