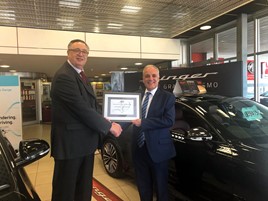 NMG is one of the longest serving Kia dealers in the UK and received Kia platinum dealer status and Kia aftersales dealer of the year award in 2016.

NMG has been trading for 49 years and was a family owned business until the Holden Group purchased it in April.

Grant Long, general manager at NMG Kia, said: “I have represented Kia and been working in the Kia franchise for even longer and it is truly a fantastic franchise to work with.

“Kia treats all its dealers as equal partners which I feel is a refreshing and ideal platform for success. We’re hugely excited to see what the next 20 years have in store for NMG Kia!”

Lear said "NMG has been one of its longest serving dealers and has represented Kia in Norwich and Norfolk "at the highest levels".

“We look forward to their continued growth and customer service under the new ownership of Holden Group.”

NMG Kia has a wide range of new and used cars, including the Kia XCeed, with prices starting at £20,795.

“The SUV-cum-CUV segment is growing pretty fast. XCeed will account for a large portion of our Ceed sales.