The Retail Automotive Alliance (RAA) is celebrating the largest membership base in its history after welcoming franchised car dealers SG Petch and Clive Brook Volvo joined its ranks.

The joint venture purchasing group now has 27 motor dealer group members, representing businesses with a combined turnover of £3.25 billion in its 15th year of operation.

RAA director, John Matthews, said: “2020 has been a tale of two halves but despite the first half losses, the members have all enjoyed a strong comeback with many recovering most, or all, of the lost months.

“What has really become clear however, is the value that the RAA brought to them during the Lockdown periods with regular online forums to learn how others are solving now common problems such as furloughed staff, competitive PPE prices and showroom protocol.

“The interest in RAA membership has increased markedly, hence two new members in a year like this one, but we have also struck new three year deals with Castrol and Cox Automotive which will deliver even greater savings for the members when they need it most.”

Darlington based SG Petch represent 11 franchised car brands at seven dealerships across the North East, including a new Kia and Mazda site, in Sunderland, which opened earlier this year.

Steve Petch, the chief executive of SG Petch said: “Joining the RAA meant changing several key suppliers for us but we looked at the savings and it was clear that the overall benefit of RAA membership was too significant to ignore.”

Clive Brook Volvo has been trading since 2008 and operates the Swedish brand’s franchise in Huddersfield and Bradford.

The group, which recently gained planning permissions for a third site – specialising in used cars – in Bradford, achieved a turnover of £52m in 2019.

Clive Brook Volvo managing director, Clive Brook, said: “It’s not just the commercial benefit that appealed to me (when joining the RAA), I really value the opportunity to meet the other 26 RAA members and share ideas and solutions in this completely different trading environment that we all have to adapt to.” 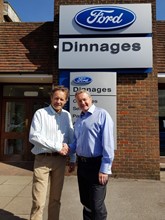