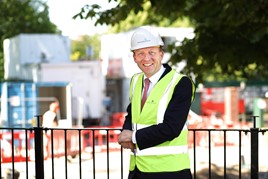 Retirement home operator McCarthy Stone has renewed its appeal for car retail property as it looks to grow its existing portfolio of 1,300 retirement communities across the UK.

The business is looking for showrooms which can be acquired to transform into new facilities as part of its bit to acquire 60 sites per year in a growth push.

McCarthy Stone said that new sites would complement over 250 others purchased over the last five years.

The business said that it typically targets brownfield land between 0.6 and 6 acres within half a mile of shops and amenities and with a bus route nearby.

John Tonkiss, the chief executive of McCarthy Stone, said: “In order to meet what is a growing demand for specialist retirement communities among an ageing UK population, we must continue to focus on increasing choice and accessibility and creating the infrastructure older generations need and desire.

“We are on the hunt for sites to develop and are very keen to speak to landowners and agents in locations that will allow us to create more communities which support retirees to enjoy a better and happier future.”

In the June edition of AM magazine, we looked at the changing shape of automotive property as an agency franchise retail model changed the requirements of car manufacturers.

The trend could see a shift to more industrial locations for car retail and the adoption of hub and spoke OEM networks, it was suggested.

McCarthy Stone said that, in its sector, greater demand is predicted for retirement village-style living.

With many people reappraising their living arrangements in the light of the unprecedented experience of the last 12 months, the business said it has already seen an uplift in interest from prospective homeowners.

And it suggested that retirement villages could be looked upon positively by planners as they brought a new stream of income to communities.

A report by WPI Strategy for campaign group Homes for Later Living revealed people living in each retirement development generate £550,000 of spending per year, £347,000 of which is spent on the local high street, it said.

Some £225,000 of this is new spending in the local authority, directly contributing to keeping local shops open.