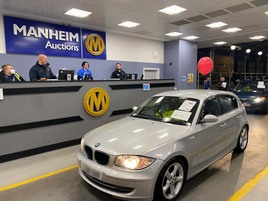 Manheim Auction Services has raised £32,000 for charity Make-A-Wish at a special charity auction.

It brings Cox Automotive’s annual fundraising total for the charity to £60,000.

Manheim’s Leeds centre auctioned off 28 cars on December 13, all for the cause. Demonstrating the generosity of buyers, 123% of CAP clean performance was recorded, with a Grade 5 average.

Three items of memorabilia were also auctioned off with all proceeds going to the charity.

Steven Cooper, general manager of Manheim Auction Services, said: “Our charity auction was an overwhelming success with buyers digging deep for charity. While we owe thanks to both buyers and vendors, this auction couldn't have been a success without the collaboration and support of our teams across multiple departments who really came together to help us end 2021 on a high.”

The auction was one of a series of dedicated fundraising events held by Cox Automotive in aid of Make-A-Wish during 2021. Several took place in honour of Manheim’s 100th anniversary, with team members setting personal challenges revolving around the number 100.

Peter Bell, chief operating officer of Cox Automotive Europe, added: “As a family-owned company, Cox Automotive is committed to always doing the right thing. It’s been another challenging year for everyone, but our team has worked hard to give something back, with many undertaking their own events and challenges to raise money for Make-A-Wish. To top the year off, raising an impressive £32,000 with our charity auction is a fantastic achievement.

“Some of our team members at Cox Automotive have received support from the charity in the past, so it’s great that we can give a little back to support the tremendous work that that the organisation does, enabling Make-A-Wish to continue carrying out as many wishes as possible for critically ill children.”

Bell covered 100 miles on his bike as he lapped Bruntingthorpe Proving Ground as part of the ‘100 for £100’ charity challenge, in May.

Manheim has re-opened its sites in Birmingham, Bristol, Colchester, Leeds, Manchester and Washington to help dealers source stock for their used car forecourts.

Since the coronavirus pandemic hit the UK, much of the used vehicle remarketing has remained exclusively online or vehicle viewings have been by appointment only.

Most popular articles in Supplier Section