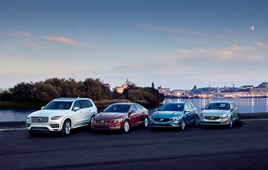 Volvo has confirmed that its entire range will be available with a plug-in hybrid variant and it will launch a new range of small electric cars for sale by 2019.

As part of this new strategy, the Swedish car company said it expects electrified vehicles to account for up to 10% of its total car sales in the medium term.

The first element of the new electrification strategy involves the introduction of plug-in hybrid versions of its 90 series and 60 series larger cars, based on the company’s model architecture.

Volvo will also broaden the range of plug-in hybrid cars it offers with the introduction of a new front-wheel drive Twin Engine variant.

Håkan Samuelsson, president and chief executive of Volvo Cars, said: “We believe that the time has come for electrified cars to cease being a niche technology and enter the mainstream.

“We are confident that in two years’ time, 10% of Volvo’s global sales will be electrified cars.”

Dr Peter Mertens, senior vice president for research and development said the company learned a lot about how people use cars thanks to its current product offering.

He said: “Our research has shown that people are driving our Twin Engine cars in electric mode around 50% of the time, meaning our plug-in hybrids already offer a real alternative to conventional powertrain systems.