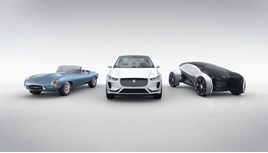 Jaguar Land Rover has committed to offering an electric element to the drivetrain of all model lines launched after 2020 - but will continue to offer diesel and petrol variants.

The company announced the intention at its inaugural Tech Fest, which is open to the public between September 8 and September 10 at Central Saint Martins, University of the Arts London, but many media outlets wrongly reported that it would come at the exclusion of conventional combustion engines.

It echoes the situation with Volvo's recent announcement that it would move towards a wholly hybrid or EV range by 2025, a move which was widely reported as the brand ending its use of ICEs.

A JLR spokesman confirmed to AM that "We will deliver BEV, PHEV, MHEV, ultra clean diesel and petrol - whatever our customers want".

The spokesman said that, by 2020 50% of the Jaguar and Land Rover ranges will be available with a drivetrain which is in some way electrified.

New electric models from Jaguar’s past, present and future have been on display at the Tech Fest event, highlighting the brand’s electric intentions.

At the event is the debut of the Jaguar Future-Type, a vision for the car of 2040 and beyond. The fully autonomous virtual concept explores mobility for the connected world of tomorrow, where vehicles could be shared not owned.

Jaguar Land Rover says with Future Type’s interface you can separately access your different digital orbits of work, family or play, dialling up what you do need, and dialling down what you don’t.

At its heart is Sayer – a voice activated steering wheel that will be able to carry out hundreds of tasks. The advanced speech recognition software will allow it to answer questions, connect to the news, organise travel and select entertainment.

According to the manufacturer it is not just the ‘key’ to your car, it’s your membership card for an on-demand service club which offers either sole ownership or the option of sharing the car with others in your community.

Also on display is the electric Jaguar E-type Zero. Acclaimed by Enzo Ferrari as “the most beautiful car in the world”, the E-type now features electric power for the first time.

E-type Zero is based on a 1968 Series 1.5 Roadster and features a cutting-edge electric powertrain for 0-60mph in just 5.5sec. It was engineered by Jaguar Classic at the company’s new Classic Works in Warwickshire, UK.