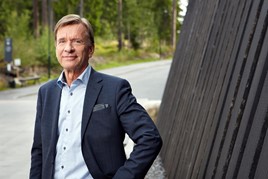 Volvo has cited the mounting complication and costs of emissions regulation standards for a decision to ditch diesel form all future products as it moves towards an EV future.

In August last year the Geely-owned Swedish car manufacturer publicised its target of selling one million electrified vehicles, stating that all of its new products will include an element of EV technology from 2019.

Today Volvo chief executive Hakan Samuelsson will tell the Financial Times’ Future of the Car Summit, in London, that diesel will no longer feature in its product plans in a strategy which will get underway with the new S60 saloon.

“We’re not saying diesel is more dirty”, Samuelsson told the FT ahead of the speech, “But it’s more complicated and more expensive.”

Volvo’s clarified drivetrain strategy comes as the FT also reported that its Chinese owner, Geely, was planning an IPO of the brand.

The newspaper reported that Geely would only consider the public offering if it managed to achieve a valuation of more than $30bn, however.

The sum sees Volvo valued at 10 times its earnings, which compares to two to three times for BMW and Daimler, the owner of Mercedes, according to calculations made by Evercore ISI analyst Arndt Ellinghorst, the FT said

The Chinese business also completed the acquisition of a 51% controlling stake in British sports car maker Lotus in January.

At Volvo, Samuelsson believes that new petrol hybrid technology is the way forward in the immediate future, with EV drivetrains to gain greater traction later.

He cited the rising costs of making diesel compliant with new emissions rules, with the need for AdBlue chemical urea to be injected into the system to reduce poisonous nitrogen oxide pollution from the engines.

“Diesel will be more complicated for more consumers, and much more expensive too,” he

said. He added that lower fuel consumption was the “only advantage of diesel,” but added: “you can get that back with a mild-hybrid engine”.

Volvo is the latest carmaker to begin phasing out diesel technology, after Toyota, Fiat Chrysler and Nissan made similar moves.

Toyota has removed diesel from all of its cars, only now offering diesel versions of the Hilux pick-up truck, while Fiat Chrysler is expected to keep diesel options in just some of its largest vehicles, classing them as light commercial vehicles rather than cars.