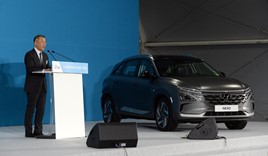 Hyundai Motor Group has unveiled plans to extend its production of hydrogen fuel-cell technology beyond its cars as part of its ‘FCEV Vision 2030’.

The Korean brand aims to produce 700,000 fuel-cell systems annually by 2030, including 500,000 units for FCEVs, as part of its plans which will see the propulsion method introduced into drones, vessels, rolling stocks, forklifts and power generators.

An announcement made in Seoul today, the manufacturer pledged to invest KRW 7.6 trillion won (over £5.3bn) in the technology by 2030, creating 51,000 jobs in the process.

“Hyundai Motor Group, the global pioneer of the commercial production of FCEV, is taking a bold step forward to expedite the realization of a hydrogen society,’’ said Euisun Chung, executive vice chairman of Hyundai Motor Group.

“We will expand our role beyond the automotive transportation sector and play a pivotal role in global society’s transition to clean energy by helping make hydrogen an economically viable energy source.

“We are confident that hydrogen power will transcend the transportation sector and become a leading global economic success.”

Next year Hyundai Motor UK begin to import its new Nexo FCEV, following its previous exploration into sales of the AFV derivative with its previous ix35 and Tucson fuel cell SUVs.

The new model will go on sale in March, is powered by a fuel cell delivering 161bhp and 291lb ft of torque, and is expected to be priced somewhere in the region of £65,000.

But Hyundai’s new plans for hydrogen indicate that it intends to leverage far more from its relationship with the fuel-type.

The second factory will help Mobis increase annual fuel-cell system output to 40,000 units by 2022, up from the current 3,000 units, it said in a statement.

The statement added: “With high energy density and ease of stack refueling, hydrogen would help reduce the comprehensive ownership costs by about 10% for all possible transportation means including rolling stocks, vessels and forklifts, according to a study by McKinsey & Company.

“The study also estimates that approximately 5.5 million to 6.5 million fuel cell system units will be required by 2030 globally.

“HMG is the only company to establish a dedicated plant for commercial production of fuel cell systems. With the construction of an additional fuel cell plant, Hyundai can quickly target market success on a global scale.”