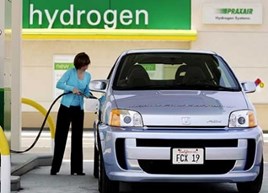 New survey results have shown that 42% of motorists would buy a hydrogen car over electric.

Servicing Stop surveyed 1,100 motorists on their preferences to electric and hybrid technology, with 58% preferring “familiar” electrics.

The results showed that more than two thirds would like to see more hydrogen filling stations, suggesting a potential increase in popularity for hydrogen, with 42% of motorists stating that they liked the fact that you can get 300 miles from a tank.

The survey revealed that the hydrogen price tag deters motorists, with just under half saying the £66,000 cost for a Toyota Mirai put them off.

Only 38% were concerned by the fuel explosive nature.

Servicing Stop’s founder and chief executive Oly Richmond (pictured) said: “Nobody quite knows what our cars are going to run on in thirty years time, but it’s clear they could quite well be hydrogen.

“As time goes by I’m sure we’ll be reading a lot more about hydrogen fuel cars as an alternative to electric, petrol and diesel but until then we’ll have to wait in anticipation of what’s to come.”