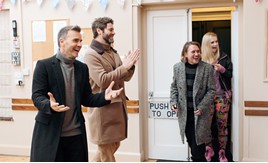 Suzuki GB showed it could still shine on Saturday night TV as it replaced former ambassadors Ant and Dec with Take That for its latest ITV marketing campaign.

The pop trio, which recently entertained franchisees who attended its annual dealer conference, took centre stage for the 'Suzuki #BringTheFun to Saturdays on ITV' marketing campaign for the first time last weekend.

As part of its three-year partnership with ITV Saturday evenings, Suzuki Take That took part in the first of three ‘Suzuki Surprises’.

The series of three 30-second adverts launched January 5 and follow Gary Barlow, Mark Owen and Howard Donald as they deliver some incredible surprises to their biggest fans as part of their 30-year anniversary.

The campaign sees the UK’s favourite boyband travel across the UK in a spacious Suzuki Vitara SUV to surprise fans with a journey they will Never Forget – and enjoy an in-car karaoke session with their idols on the way.

Tammy Charnley, general manager marketing, Automobile Division at Suzuki, said: “This integrated, co-branded partnership places Suzuki at the centre of Saturday night entertainment on ITV and continues to position Suzuki as the vehicle that delivers fun for all the family.

“We’re delighted to be working with pop icons Take That to bring the fun of the unexpected to everyday moments – as the UK’s most popular band they are the perfect partner to demonstrate the possibilities of our range to their hugely engaged audience.”

Bringing an end to a successful partnership that started at the end of 2015, Suzuki confirmed a week after McPartlin’s involvement in a road traffic collision on March 18 that “no further material featuring the duo” would be aired.

McPartlin was later fined £86,000 and banned from driving for 20 months after pleading guilty to drink-driving.

The events were a blow for the brand, which had generated publicity via regular car giveaways on Saturday Night Takeaway, sponsorship slots in prime-time Saturday night advertising breaks and viral YouTube videos.

Wyatt told AM: “We’ve made no secret of just how successful that partnership was for us. In terms of familiarity, awareness and likeability, it really did great things for the brand.

“With Ant and Dec, for a long time, I don’t think there was a brand in the UK that wasn’t envious of us.”