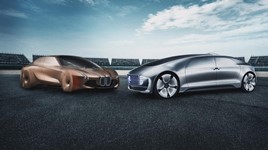 BMW and Mercedes-Benz parent company Daimler have announced plans to embark on a “long-term strategic cooperation” to boost their respective development of autonomous vehicle technology.

The two German premium car brands want to accelerate their next generation of technologies for driver assistance systems and highly automated driving on highways (SAE Level 3 and Level 4) and have said that the new collaboration will result in new systems which will be ready for sale in the mid-2020s.

A Memorandum of Understanding has now been signed by BMW and Daimler which commits them to jointly develop the technology.

“Combining the key expertise of our two companies will boost our innovative strength and speed up the spread of this technology”, said Klaus Fröhlich, member of the Board of Management of BMW AG, development.

“As we continue to pursue our strategy, we are combining the expertise of two technology leaders.

“At the BMW Group, long-term partnerships within a flexible, scalable, non-exclusive platform are fundamental to advancing the industrialisation of autonomous driving.”

Ola Källenius, member of the Board of Management of Daimler AG, responsible for Group Research and Mercedes-Benz Cars Development, said: “Autonomous driving is one of the most revolutionary trends for us at the moment, and the entire Daimler Group is working very hard on it.

“As always at Daimler, our top priority is safety. Instead of individual, stand-alone solutions, we want to develop a reliable overall system that offers noticeable added-value for customers.”

In a stament issued jointly by BMW and Daimler this morning, the two brands revealed that development work on new autonomous technologies will be carried out via “a scalable architecture covering several stages of automation, with Levels 3 and 4 enabling automated driving on highways”.

In addition, the two partners plan to discuss the possibility of extending their collaboration to cover higher levels of automation, both on highways and in urban areas, it said.

The BMW Group has been working on automated vehicle technologies since 2006, and has established a non-exclusive platform with technology specialists, suppliers and OEMs to take it to series maturity.

Since 2017, work in this area has been consolidated at the Autonomous Driving Campus in Unterschleissheim, north of Munich, but more than 70 test vehicles are trialling state-of-the-art technology around the globe.

At Daimler AG a series development projects, not only for specific Level 3 vehicles but also for Levels 4 and 5, have been developed largely in-house.

This year will see the launch in San José, Silicon Valley, of the brand’s first pilot programme, with Bosch, on self-driving vehicles (Levels 4/5) in urban environments.

AM Poll
Will e-scooters and micromobility reduce UK car ownership by 2030? Please leave a comment
Vote
View all
3213