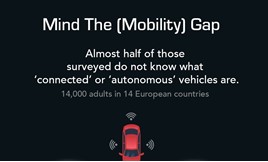 Motorists aged between 18 and 36 are “most likely” to buy an autonomous car, but cannot correctly define what autonomous means, according to research.

While more than half (56%) of those surveyed correctly identified the term to mean ‘a car which drives itself’, while 24% could not define it correctly.

Avis Budget Group’s president of international, Mark Servodidio, said: “It’s clear as an industry we need to educate consumers across markets and age groups, highlighting the innovations and technological advances that have been made – which have helped make developments that were once only seen in science fiction, a reality.”

The lowest understanding of the term was found to be among the 18-23 (47%) and 24-36 (51%) age groups, compared to 67% for those aged 66-plus, despite younger age groups being the most likely to prefer an autonomous car over the one they currently own.

Importantly, 3 in 5 (60%) of Brits surveyed said they would prefer to drive their own car than use an autonomous vehicle.