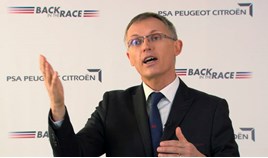 In an interview with the Financial Times Tavares said that Vauxhall, "has another plant in mind" if the conditions of Brexit are "unfavourable".

"Frankly I would prefer to put it in Ellesmere Port but if the conditions are bad and I cannot make it profitable then I have to protect the rest of the company and I will not do it,” Tavares said.

Last month the PSA Group said that its plans to produce the next-generation Vauxhall Astra hatchback at Ellesmere Port – which currently employs 1,000 people – were dependent on the final terms of Brexit and the acceptance of a “New Vehicle Agreement” by the Unite trade union.

The French carmaker announced that its plant in Russelsheim, Germany, would manufacture Astra and that it is planned that the second plant will be Ellesmere Port in the United Kingdom.

However, the Astra hatchback is currently produced in Ellesmere Port and in Gliwice, Poland, and a statement issued last month stated that there were conditions to the agreement related to the future model.

It stated: “The decision on the allocation to the Ellesmere Port plant will be conditional on the final terms of the UK’s exit from the European Union and the acceptance of the New Vehicle Agreement (NVA), which has been negotiated with the Unite Trade Union.”

Further uncertainty around the future of Ellesmere Port came after Ford unveiled a restructure of its European manufacturing operations which would lead to 12,000 job cuts as the brand targets a 6% EBIT margin in the loss-making region.

Nissan also announced 12,500 job cuts at its manufacturing facilities across the globe last week, although The Guardian reported that the Japanese carmakers Sunderland plant might avoid further job losses beyond the 500 voluntary redundancies it is currently seeking at the plant.

Earlier this year Honda also announced its plan to leave the UK with the closure of its Swindon plant.

He said: “Industry still does not know what the UK’s relationship with the EU will be in the coming weeks and months.

“Uncertainty has already caused serious damage – car plants are on enforced shutdown, investment has been cut and jobs lost. This cannot go on.”