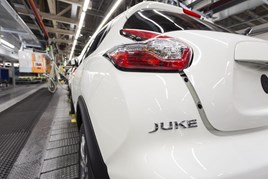 Nissan’s Sunderland car manufacturing plant appears to have avoided a new round of job cuts as the Japanese car brand announced that it plans to shed 12,500 employees worldwide.

The job losses, which will be implemented over the course of the next three years, will see around one-in-10 of the manufacturer’s workforce dispensed with following publication of a poor set of financial results during the period to June 30, 2019.

But while it has yet to reveal where the cuts might fall, The Guardian newspaper reported that its union sources were hopeful no more jobs will go at the Nissan plant in Sunderland.

Nissan is already seeking 500 voluntary redundancies at the plant, which currently produces the Qashqai and Juke SUVs and the brand’s Leaf electric vehicle (EV).

South America is expected to be the main target of job cuts.

According to The Guardian, Nissan will also reduce its global production capacity by 10% by the end of 2022 and cut the size of its product range by 10%.

Yesterday (24) AM reported on early reports of the job cuts at Nissan and also revealed that while PSA Group had reported record H1 profitability, Aston Martin suffered a share price slump and Daimler revealed Q2 losses on a day of financial results publication across the sector.

Today (July 25), the Volkswagen Group revealed that it had achieved growth in H1, however, with its reporting of a pre-tax profit rise of 6.5% in the first six months alongside a 4.9% increase in revenues.