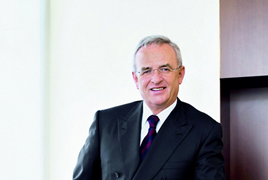 Volkswagen Group has branded allegations that chief executive Herbert Deiss and chairman Dieter Poetsch were guilty of market manipulation in connection to the dieselgate scandal as “groundless”.

Responding to the allegations, VW's management board member for legal and integrity, Hiltrud Werner, made it clear that the allegations would be contested in court.

She said: "The company has meticulously investigated this matter with the help of internal and external legal experts for almost four years. The result is clear: the allegations are groundless.

She added: "If there is a trial, we are confident that the allegations will prove to be unfounded.”

Prosecutors sitting in Stuttgart ruled that the Mercedes-Benz owner had committed a “negligent violation of supervisory duties” by failing to meet regulatory requirements for some of its diesel vehicles since 2008.

Back in June the Automobiles Germany’s transportation ministry ordered Daimler to recall 60,000 Mercedes diesel cars in Germany after tests revealed that the vehicles only comply with emissions limits when a certain function is activated.

The company said that it would not challenge yesterday’s court ruling.

“It is in the company’s best interest to end the administrative offence proceeding in a timely and comprehensive manner and thereby conclude this matter,” Daimler said in a statement.

The New York Times reported that a successful prosecution could have serious financial consequences for the Volkswagen Group, as well as potential reputational damage as the manufacturers seeks to rebrand itself as a market leader in zero emissions elecrtric vehicles (EVs).

Deiss, Poetsch and Winterkorn could face maximum jail terms of up to five years and VW shareholders have sued, seeking damages of $10m (£8m), it reported.

Lawyers for the three accused indicated that they would contest the charges.

Diess’ lawyer, Tido Park, said that his client had joined VW Group as head of the Volkswagen brand in July – just months before the rigging became public in September, 2015 – and, as such, could not have foreseen the scandal would have such a huge impact.

Felix Doerr, representing Winterkorn, meanwhile, said that the former chief executive had no early knowledge of the use of prohibited engine control software in the automaker's diesel cars.