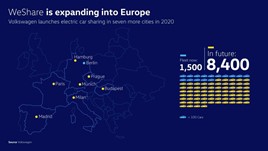 The Volkswagen Group is set to expand its WeShare VW and Skoda car sharing scheme across Europe, but the UK will not feature in plans for the manufacturer’s mobility offering.

The German carmaker plans to expand its fleet of WeShare vehicles from 1,500 to 8,400 with the expansion of the scheme from Berlin into Prague and Hamburg in the spring, followed by Paris, Madrid, Budapest, Munich and Milan.

In Prague and Budapest Skoda vehicles will also be introduced to the scheme which was piloted with a fleet of zero emissions e-Golf hatchbacks in 2019.

VW’s e-up! and new ID.3 electric vehicles (EV) will also be part of the scheme.

The decision not to include the UK’s cities in the growing WeShare scheme follows BMW and Daimler’s joint decision, last month, to withdraw their joint ShareNow car sharing scheme from the UK amid a lack of appetite from consumers.

The Financial Times reported that the German giants’ car sharing platform, ShareNow, would be withdrawn from the United States and Canada due the “volatile state of the global mobility landscape” and the “rising infrastructure complexities facing North American transportation”.

Meanwhile, it will leave Brussels, London and Florence due to “low adoption rates”, leaving it operational in just 18 European cities – including seven in Germany.

Earlier this month the FT also revealed that VW would “significantly reduce” its investment in its app-based shuttle service, MOIA, which it had planned to expand from Hannover and Hamburg to London.

“We want to keep our foot in the business,” chief executive Herbert Diess told 120 colleagues at a conference in Berlin, but added: “we need the full focus of the company on the breakthrough of electric mobility.”

The Volkswagen Group does foresee opportunity in the car sharing mobility sector.

“For us, 2020 will be a year of dramatic growth,” said Philipp Reth, the chief executive of WeShare said this week.

“We are convinced that all-electric free-floating car sharing will be a significant, scalable transitional element in the field of sustainable, shared mobility for a considerable time on the way to automated transport systems.”

Reth said that the objective must be to make a breakthrough with the wider public together with the cities.

He added: “We therefore hope that will receive support from the cities for example in the area of parking charges for car sharing vehicles or the designation of new car sharing areas in public spaces with a view to providing incentives for potential users and making car sharing even more interesting and relevant.”

In Berlin, where WeShare was launched in June last year, about 50,000 customers are now registered for the service, with three-quarters having used the service at least once, according to the Volkswagen Group.

Berlin’s WeShare fleet has completed more than three million kilometers, which corresponds to an average of four to five trips per car and day.

Volkswagen Group and WeShare have partnered with the Schwarz Group to install a total of 140 public charging stations at 60 Lidl and 10 Kaufland locations in Berlin to battle one of the scheme’s greatest challenges – the adequate availability of public charging.

In the UK, Volkswagen and Tesco announced plans in 2018 to create 2,400 new public electric vehicle (EV) charge points across the UK, with the target of completing work to install rapid or fast charging at 600 stores by this year.