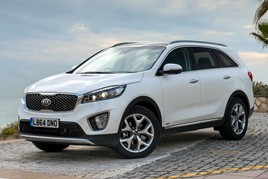 The Kia Sorento was named 'Best Large SUV' and 'Best Car to Own' as it claimed top spot in Auto Express magazine’s annual Driver Power Survey.

The seven-seat Korean SUV achieved an overall score of 92.05% by owners and was also rated as having the best interior, while no car could match it when it comes to practicality and boot space.

The Sorento narrowly beat a former Driver Power champion, the Peugeot 3008, proving that despite being on sale for a number of years, it is still a deeply satisfying car to own.

Third place went to the Lexus RX, ahead of another Kia, the Niro, and the second-generation Mazda CX-5.

Steve Fowler, editor-in-chief at Auto Express, said: “We’ve long been fans of the Kia Sorento, a car which gets so much right. It’s the result of Kia listening to its customers, and adapting accordingly. And we shouldn’t overlook the standout performance of the Kia Niro either, a 4th-place finish overall and the titles of Best Small SUV and Best Plug-in Hybrid is an exceptional result.”

Kia Motors UK claimed the Franchise Partner of the Year Award at the AM Awards 2020, back in February.

Commenting on the brand's latest awards success, president and chief executive, Paul Philpott, said: “These wins for Kia are especially important to us as they’re voted for by our customers, people who live with our vehicles day to day. It’s also humbling to see a range of our vehicles praised for important and relevant ownership elements like infotainment and practicality.

"We as Kia Motors UK, alongside our dealer partners, take huge pride in these awards and will continue to listen to our customers and deliver what they want.”

Once again, cars from Asian brands dominated the upper reaches of Driver Power, with seven top performers - including the British-built Toyota Corolla on its debut appearance - finishing in the top 10.

Ewan Shepherd, director of Lexus in the UK said: “Lexus has a proud history of success in the Driver Power survey, but it is never taken for granted. We are constantly working to improve the quality and performance of our models and our self-charging hybrid technology, supporting this with the best possible customer service. We are grateful to all those taking part in the survey who show such appreciation for our vehicles.”

Established in 2002, Driver Power is the biggest and most comprehensive car satisfaction survey in the UK. Drivers of cars up to 24-months-old were quizzed in all aspects of ownership, across 31 areas that combine to make up nine voting categories.

That means Driver Power is able to clearly rate cars across areas as diverse as boot space, quality of in-car tech, economy, ride and handling, and reliability.