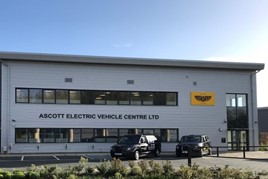 LEVC has moved closer to its target of a 50-site electric taxi and light commercial vehicle franchised network by the end of 2020 with the opening of a new Dartford location.

The Geely-owned London Electric Vehicle Company, which was featured in an AM manufacturer face-to-face feature this summer, welcomed the official opening of another site with existing franchisee Ascotts late last week.

It will supply full sales and aftersales support for the TX electric taxi and newly-launched VN5 electric van.

A statement issued by LEVC said: “Ascotts started business in 1980 and has been an existing main dealer for LEVC since the launch of TX in 2018 – originally appointed as the first independent authorised dealership - providing sales and service support for the TX electric taxi at their site in London.

“The new flagship site in Dartford builds on Ascotts extensive experience selling the TX electric taxi and allows them to extend their customer base to the wider commercial vehicle market.”

Inter Vehicle Group (IVG) became its first full dealer in Wales and will now supply the region with both the brand’s TX taxi and fully electric VN5 light commercial vehicle (LCV) from its facility in Cardiff.

LEVC is on a drive to ensure that its UK retail network grows to 50 locations by the end of 2020, allowing customers to reach their nearest dealer in no more than 45 minutes.

Speaking to AM at September’s launch of the new VN5 electric van, LEVC chief executive, Joerg Hofmann said: “The plan is our factory has a capacity of 20,000 cars per year.

"We want to fill the factory within the next three years: we want to sell 20,000 cars, which is realistic. The TX taxi and shuttle, both derivatives, have a potential to make, let's say 6,000 cars.

"I believe that means you have capacity for another 14,000 for the van, if we are running at full capacity. This would be our three-year scenario. I can’t tell you what is on the cards for the next half year or something, but in three years from now, we should be on that level.”