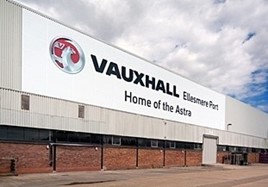 Bosses at the newly-formed Stellantis car manufacturing super group are said to be poised to make a decision on the future of Vauxhall’s Astra-producing Ellesmere Port plant.

Reports suggest the OEM, which brought has together PSA Group and FCA Groups in a 50/50 merger, has been holding meetings this week to review options for the Cheshire site.

AM understands that three possible options are on the table: closure of the plant; a continuation of ICE production until the 2030 ban on the sale of all non-electrified new cars; investment in a new EV production line.

According to a report on the Telegraph newspaper, new Business Secretary Kwasi Kwarteng has been involved in talks with the company in a bid to urge Stellantis to invest in the plant which currently employs around 1,000 people.

However, commenting on the UK Government’s decision to ban the sale of non-electrified new vehicles from 2030, Stellantis chief executive Carlos Tavares has said that Governments can "create situations which destroy the business model".

Tavares said that "from a pure logistic perspective" it could make more sense to focus investment in electric car manufacturing in the EU rather than the UK, because it sells more of the vehicles in the former.

Stellantis appears to be making plans ahead of its first full-year financial results as a joint entity, which are set to be published on March 3.

Speaking to ITV news reporters this week, Justin Madders, the MP for Ellesmere Port, said that the Vauxhall plant would be a "hammer blow" to his community.

He added: "It would send a terrible signal out about where manufacturing lies in the Government's priorities in the post-Brexit world.

"We really have to make sure that we get the right decision on this."