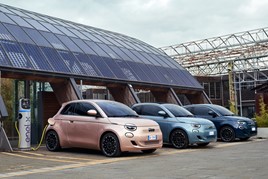 Fiat will reward the most economical drivers of its new Fiat 500 electric vehicle (EV) with a new form of cryptocurrency that can be exchanged for vouchers to be spent on Amazon, Apple, Netflix or Spotify.

A Fiat app is used to check the number of KiriCoin collected, based on an eco:Score, with one kilometre of city driving said to be more or less equivalent to one KiriCoin, with each KiriCoin worth two euro cents.

“Simply by driving the New 500, connected and equipped with the new infotainment system, KiriCoins can be collected in a ‘virtual’ wallet shown in the Fiat app.

“Driving data, such as distance and speed, is uploaded to the Kiri cloud and automatically converted into KiriCoins, using an algorithm devised by Kiri.

“The result is downloaded directly to the user’s smartphone and the KiriCoins can then be used to purchase products and services in the Kiri marketplace.”

AM reported today that a UK thinktank had accused carmakers and the Society of Motor Manufacturers and Traders (SMMT) of “scaremongering” in their lobbying efforts related to the 2030 ban of purely petrol and diesel-powered cars.

The UK Government is expected to launch incentives and punitive measures to help encourage the uptake of EVs in the run up to the ban and mitigate a fall to 800,000 annual new car sales mapped out by the SMMT in projections, however.

The new green flash on electric vehicle number plates was hailed as a key tool in the roadmap to EV perks such as cheaper parking and access to special EV lanes.

In a statement issued today, Fiat said that its eco-driving rewards initiative could be extended in future to reward sustainable behaviours in other sectors such as the purchase of renewable energy, organic groceries and products.

It said: “The goal is to create a community of people, by means of a loyalty program that incentivises a sustainable lifestyle.

“The New 500 can therefore be considered the first step in this new system that does not reward purchases but instead rewards more sustainable actions.”